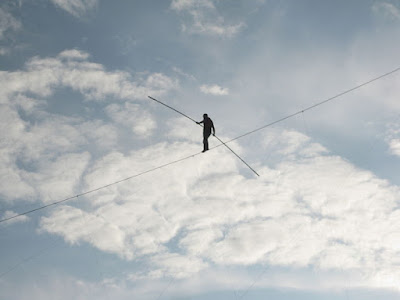 At the end of my third year of college I auditioned for a job playing piano on a cruise ship. I don't remember where I heard about it but the short of it was that I needed to record a demo of myself in a trio setting and playing solo, demonstrating my group and improvisational skills. I sent the tape off to Florida where the cruise line was out of and awaited a reply. A couple of months later I received a call from the entertainment director and was offered a spot in a pit band for an unspecified period of time. The PD said that he was impressed with my audition, he then asked me a question that literally changed my life.
"Joe, how's your reading?"
Now I knew exactly what he meant by that, and without a pause I answered.
"Its good."
There were two ways that I could have gone about that question. I could have answered truthfully, that at that time I couldn't read beyond a basic lead sheet and in which case I wouldn't have got the job. Or, I could of answered untruthfully, as I did, get the job and work my ass off as soon as I got on board to keep it.
If I had answered truthfully I would have missed out on the life experience I through myself into and probably would have spent another summer in a factory. I would have regretted not taking a chance and jumping right in, regardless of the consequences. This job was much bigger than just a paycheck. It meant getting on a plane, going far away from everyone I knew and doing this music career for real like I always wanted. Risky business for sure.
Fast forward to the first day. I've met the band, been given the riot act on boat safety and stowed away my things. I meet the band leader and he gives me the run down and the shake down and hands me this book. 150 pages.
"This is tonights show!"
No breath....
"and this is tomorrow nights show!!"
As he hands me the second book I'm thinking to myself, well if I wanted a crash course in playing in an off broadway pit band then I had stepped onto the right boat.
I guess you could say I was in some pretty deep waters at that moment or at least I was going to be.
For the next two weeks I spent every moment of my spare time practicing and reading and sweating and worrying that I was going to be thrown overboard at any time. I mean the band was there specifically to back up the dancers, screw up and the whole show goes down.
By the 14th day I had just about memorized my parts and was reading without looking down at my hands. Unfortunately since I played so poorly for the previous 12 days or so the sound guy turned me off going through the P.A.. I had really played well on that last day but the band leader said he couldn't hear me again and that at this point I had two choices. I could ask to leave the ship, go and work on my reading and call them when I was ready, or, they could ask me to leave in which case I could never come back. I attempted to plead my case that I was really playing that last time but by then I realized they all knew I had been turned off going through the sound system.
Well you takes your chances in this life or you don't it's as simple as that.
For the next three weeks before they found my replacement I spent afternoon, evening and late evenings playing solo piano in the dining rooms. Since I had been working so hard playing broadway shows and really digging in, my playing was truly amazing. I was playing stride and left handed bass lines and soloing and changing key on the fly and taking requests and making tips, American dollars back in the 90's had a certain punch to them.
I had finally become a true piano player of the first order. Those 5 weeks on that ship changed me and my playing for the better, regardless of what terror I went through. In the end I never played another cruise, though I could have gone back if I wanted to later.
I took a chance on myself, one of the first of many to date and I have no regrets.

So, have you ever done something that was at the time so far out of your comfort zone because something inside you said "you need to do this"?